4.75 pounds of basil for pesto

Last night I found my opportunity. I went down to the garden while all of the summer camp kids (all 50 of them) and councilors were at the bowling lanes. Sundays are when the new kids arrive and some leave. It’s also a time when the councilors and campers get to know each other over some ice cream and bowling. But while I had the house to myself, I thought it an opportune time to harvest all the basil and get it ready for making pesto. Turned on a little Earth, Wind and Fire on the stereo and got to work. More like play. Almost 5 pounds. With the stems removed the scale still showed 4 pounds. And you should have smelled the kitchen. Unbelievable. It was like being in detox. Invigorating. When the kids came back, they couldn’t help remarking how wonderful the kitchen smelled. Basil! Is there anyone out there that doesn’t like this stuff?

My recipe was for small scale:

It ended up not scaling as well meaning that I only ended up using 4 cups of olive oil and 12 cups of cheese. But it all worked out.

Pesto balls going in the freezer.

I didn’t weigh the pesto at the end, but I would imagine it was around 10 pounds. A little ambitious, but I’d say well worth it. I’m not sure what pesto costs at the store, but it seems rather pricy for just a small 1/2 pint container. Another savings is to use walnuts as they’re much cheaper. In the freezer they go to freeze the small individual balls. Since a little goes a long way, you wouldn’t want to freeze the entire bowl in one big massive pesto slab. Once they’re frozen, they’ll get into some ziplock bags for long-term storage.

Now that the basil plants have been cut, they should give me another flush of growth for an additional harvest sometime in late July or early August.

And speaking of pesto, the first slicing tomato arrived. How can anyone not take seriously the first slicing tomato of the season? It’s a big deal. And the first tomato to get there deserves some special attention. It was from the variety called Kiwi and weighed in at 9 ounces. Not huge, but sizable. I’m very impressed with this plant; very prolific. The taste was mild with some of that old tomato flavor. It just melted in the mouth.

The first big tomato of the season! The Kiwi turned out to win the race. 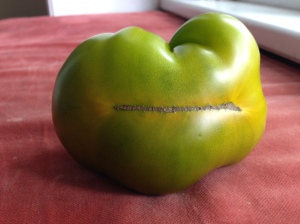 That yellow flush that shows when the greens are ripe.

The Juliets for making sauce. A small paste tomato. I expect a lot from these plants this year.

I’ll also be making tons of sauce and the Juliet variety are going to contribute to the cause. The others that will are Debarao, Amish Paste and Big Beef.

3 thoughts on “Tomatoes and Pesto”

Live camera of the backyard. Click the image to go to my weather page.