We’re late out of the gate for the 28th of April. The Green Mountain state isn’t green quite yet, even in the southern part of the state.

Just a brief update; but not much new. Tomatoes are in with a couple of new varieties to add to the list: Mortgage lifter and Copia. Mortgage Lifter is a famous heirloom variety made by Marshall Byles (read the story here) in the 1930’s. Copia is a red and orange striped tomato similar to Box Car Willie. The tomatoes went into the hoop house 4/24, although 4/20 is my usual date. 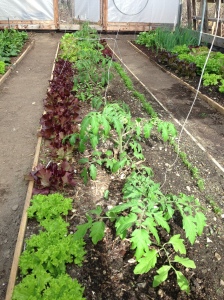 As I’ve mentioned before, it’s important to pay attention to the forecast. April 20 through April 23 had some very cold nights so I waited for them to ease up. Tomatoes won’t take too well you throwing them into a freezer right from their cozy indoor lights. Once hardened off, they can survive some cold nights under the hoop house with a row cover over them. The soil temperature is around 55-57 F so that’s like having a little furnace under them. The row cover will trap that heat in.

A few other projects I had were the blueberries, raspberries and strawberries. With the bloobs and rasps, I had to rent a sod cutter to rip out the grass where they would sit. Two 45 foot rows of each. It was a somewhat easy machine to handle, although I had to end up pushing it quite hard much of the time because the wheels had a hard time getting traction on the grass. Anyway, it all worked out. And now the job is to keep them from drying out and hope they can get established quickly.

The bloobs need acidic soil and I was busily amending with peat moss and sulfur. Rasps don’t need much amending; their soil requirements are much less finicky. 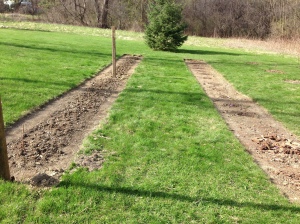 Raspberries (Caroline) on the left, blueberries on the right (Reka, Jersey, Elliot).

Raspberries do need some sort of trellis, usually called a T-trellis. Although I haven’t finished building it in the photo, it’s a simple trellis to keep the canes upright as they can get quite tall, especially the ever-bearing varieties that fruit on the first-year canes.

The strawberry bed was simple enough. It was just a 2 1/2 feet wide by 22 feet long bed outlined with some large branches I had lying around. 42 plants in all. The soil was turned over removing a lot of the roots and debris that were remnants from the shrubs and brush that were taken out to make room. A little amending, some straw and I was good. I chose the ever-bearing variety Seascape. All the berries I got were from Nourse Berry Farm.

I’m growing many tomatoes in large pots this year as well as in the ground in hopes to get as much tomatoes for sauce as possible. Blight is always a concern and I’ll be taking some steps to thwart that. More information on that to come soon. Until next time. 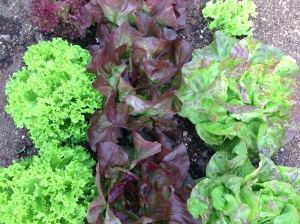 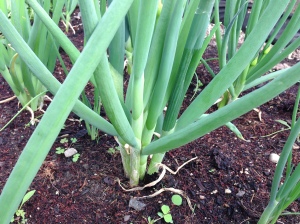 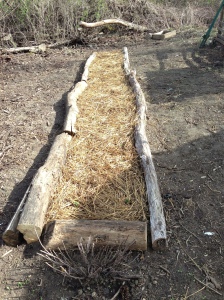 One thought on “Late out of the Gate”

Live camera of the backyard. Click the image to go to my weather page.